The Bureau of Identification Really Means it
Post Reply
12 posts

My name is Seerbah! I am running for Castellan to demote and possibly imprison Garak! I’m currently drawing photos of fellow Cardassians of the First Order. If you want a drawing let me know.
Ask a simple question, get a complicated answer.
Top

It is about time. I hope you will make Cardassia great again. Because everything that the plain, simple tailor/traitor did was to turn us into a UFP protectorate.
By the way, other Cardassians are running for Castellan too so I don’t know… 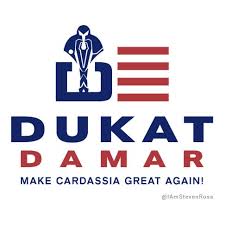 Yes, we have threads on Cardassian art so you can use them or you can start your own thread. I definitely want a drawing.
I am the Lizard King, I can do anything!
Jim Morrison
Top

He should’ve never been allowed back home to cardassia prime! That will be the first thing I change when I’m elected and if I’m not, then I’ll back up Dukat any day!
Ask a simple question, get a complicated answer.
Top

The thing with those washing machine manuals… cough… codes… cough he was deciphering for the Feds… It was not one of his finest hours. I wonder how many decent Cardassian soldiers died because of his pro-Federation bias. On the other hand, having in mind what a Federation lapdog Alon Ghemor was, I would consider Garak an improvement.

By the way, he was sent as an ambassador to the UFP for about 8 years exactly because no one wanted him on Cardassia. He was too tainted for all political factions.

I guess he hated Dukat and the Cardassian military so much that at some point he even supported sworn enemies of Cardassia only to undermine their influence and decisions.

So you might send him as an ambassador to some mud hole or give him to the Guls from the Military Intelligence. They would love to have a chat with Mr. Garak.
I am the Lizard King, I can do anything!
Jim Morrison
Top

If we give him a pathetic assignment in some far off mud hole that would give him too much freedom. I think taking him to the military is best. He’s dangerous when left alone.
Ask a simple question, get a complicated answer.
Top

Great avatar, the lady officer who served on Vetar under Gul Evek. I really like her distrustful mien. She was among enemies, after all.

Yes, Garak can be a handful so he must be kept on a tight leash. Still, his talents for lying, cheating, and obfuscation might prove useful in diplomacy and negotiations. We simply have to make sure he lies and cheats under our supervision.
I am the Lizard King, I can do anything!
Jim Morrison
Top

There are ways to “program” him. There are species that put whole armies together to react to danger and fight as an example. We could find some way to do this. Make him embrace his old ways of interrogation. I thought of using some of his fed friends as hostage but a hostage situation to make someone do something is tricky. Thoughts?
Ask a simple question, get a complicated answer.
Top

Well, I don’t think that any mind influencing techniques would help, all black ops agents are extremely resistant to such methods and one never knows whether the result would be more controllable than the original sample. We mind end up with a brain-dead zombie of no avail.

I am not sure he has fed friends. Deep inside, he despises the Feds and their values and knows that their presence on Cardassia is detrimental but he also realizes that Cardassia has neither the resources nor the geopolitical standing to kick them out. A hostage situation involving a Fed diplomat would reek of terrorism, would put the citizens off, and would make Cardassia look incapable of controlling its own political process.

I think we have to make him realize how precarious his position is. His old Obsidian contacts are all dead, the newly created Cardassian Intelligence Bureau is a government structure that tries to avoid any parallels with the Obsidian order and is keen on maintaining a clean public image. He is surrounded by naïve Pro-Federation democrats and dissidents who don’t have any understanding of geopolitics, strategy and long-term national interests and have no idea who this old timer really was.

He may not like it but the Cardassian military is the only structure that remained viable in the wake of the Dominion war. In this sense, he might find his conversation with his counterparts from the military intelligence highly informative. Especially if they present him with a full list of the Cardassian military personnel who got killed as a direct result of his espionage for the Federation.

A good old blackmail – he works for them, gathers info for them, bamboozles the Federation representatives and stays useful where he is. As the saying goes, there is no such thing as a former spy. In return, the Cardassian citizens would never know whose son Mr. Garak was, what he did for the Obsidians and what he did on DS9 during the Dominion war. Of course, it would take close monitoring and several molls to check on his activities, just to make sure, he does not get any ideas.

I firmly believe that Mr. Garak would make a pragmatic and a very patriotic choice when faced with the existing options.
I am the Lizard King, I can do anything!
Jim Morrison
Top

I could do the checking up on him. I can pretend I’m just there to chat up about the old days and being a widow makes me look even more lonely and desperate and he might open up to me a bit.
Ask a simple question, get a complicated answer.
Top

Excellent idea!
I am the Lizard King, I can do anything!
Jim Morrison
Top
Post Reply
Tweet
12 posts

Return to “Say Hello to your Fellow Cardassians”

Users browsing this forum: No registered users and 0 guests

All things Star Trek, including Cardassians, belong to Paramount and CBS Studios Inc. This forum is for FAN ENTERTAINMENT ONLY and we do not receive any income from anything contained here. We are merely fans in no way possible affiliated to CBS and/or Paramount. We don't represent their views at all in any way possible, any views representated on this site are the views of the fans only.

The wallpapers and the header of the forum are created by Gazomg and are used with his kind permission.
http://gazomg.webs.com/ http://gazomg-trek-art.blogspot.com/